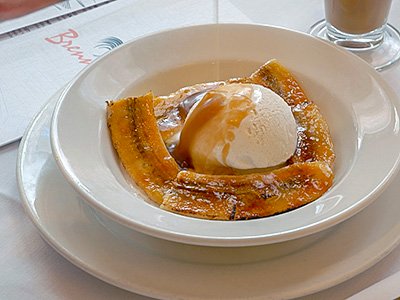 Brennan's Bananas Foster recipe is a New Orleans classic that you are going to want to share with everyone.

In the 1950's, New Orleans was the major port of entry for bananas shipped from Central and South America. Owen Edward Brennan challenged his talented chef, Paul Blangé, to include bananas in a new culinary creation-Owen's way of promoting the imported fruit. Simultaneously, Holiday Magazine had asked Owen to provide a new recipe to appear in a feature article on Brennan's.

In 1951, Chef Paul created Bananas Foster. The scrumptious dessert was named for Richard Foster, who, as chairman, served with Owen on the New Orleans Crime Commission, a civic effort to clean up the French Quarter. Richard Foster, owner of the Foster Awning Company, was a frequent customer of Brennan's and a very good friend of Owen.

Little did anyone realize that Bananas Foster would become an international favorite and is the most requested item on the restaurant's menu. Thirty-five thousand pounds of bananas are flamed each year at Brennan's in the preparation of its world-famous dessert.

Recipe By: Brennan's
« Back To: New Orleans Recipes