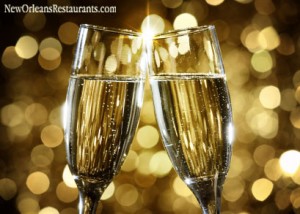 With 2012 rapidly coming to a close in less than two weeks, it's time to shore up New Year's Eve plans if you haven't already.  Each New Year's Eve downtown New Orleans is bustling with activity. Not only because of all the college football fans visiting from their respective home towns but also because the city throws a fantastic New Year's Eve party.

The evening's formal festivities begin in front of Jackson Square around 9:00 pm and will include live musical performances by the Lagniappe Brass Band, MyNameIsJohnMichael and finally, Shamarr Allen and the Underdawgs. The New Orleans Hornets Buzz Patrol will be out dancing in the streets with partygoers throughout the evening as well.

At midnight the ball will drop to usher in the new year, and the evening's formal festivities will end with a 15 minute fireworks spectacular over the Mississippi River. Afterward, revelers will continue the celebration well into the wee hours of the morning throughout the French Quarter. This is truly one of the most special evenings of the year in the Crescent City.

If you're planning to be downtown for the party, treat yourself to dinner reservations at one of our favorite restaurants. The list below is divided into those offering regular evening seating and those who are also offering seating at 10:00 pm or later.  If you're interested in visiting any of these fine establishments, make reservations early because most will be fully booked come New Year's Eve.

We here at New Orleans Restaurants wish you and your family a happy holiday season and a prosperous New Year.