Gnocchi and Redfish: New favorites on the Tujague's menu 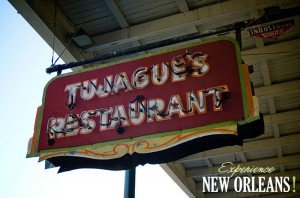 As the second oldest restaurant in New Orleans, Tujague’s has seen a lot of changes. For the most part, those changes have happened outside the restaurant’s walls. Wars have happened, shops have come and gone, but Tujague’s – thanks to a loyal following and great food - has remained the same.

But in a world that is ever-changing, even the most stoic of restaurants need a little sprucing up. That’s exactly what Tujague’s owner Mark Latter did.

While diners can still enjoy the food and atmosphere that has made the restaurant such a New Orleans staple, Latter recently gave Tujague’s a carefully thought out facelift. Part of that facelift included the lifeblood of the restaurant – the menu.

For the first time in history, Tujaque’s is offering an a la carte menu.

“We felt that the change was necessary to appeal to more people,” Latter said. “Not everyone wants a five-course meal. Before now, that was the only option that we had.”

The menu also features new items, like lamp chop, hand-rolled gnocchi and a variety of Gulf fish, alongside old favorites, like brisket and shrimp gumbo.

One must-try item is the Louisiana Blue Crab and Wild Mushroom Gnocchi - a delicious steal at only $13. The Redfish is another great addition to the menu, and it's served on the half shell.

So far, the response from diners has been overwhelmingly positive.

“It’s really been unbelievable,” Latter said. “People are excited to see more of a variety. We’re doing things that you just didn’t see at Tujague’s before. You would have never seen hand-rolled gnocchi before at Tujague’s.”

The new menu, created by Chef Richard Bickford, formerly of Commander’s Palace and SoBou, will remain the same through the end of the year, and then change seasonally.

Another first for Tujague’s is the 7-days-a-week lunch menu, and brunch on Saturdays and Sundays from 10 a.m. to 3 p.m.

The restaurant itself has also been updated, with fresh paint on the walls and new carpets. The main dining room, now outfitted with white walls and mirrors where brown paneling once shown, is the most significant cosmetic change. It’s a classic look that, while different than what was there, still gives off that classic Tujague’s vibe.

If you visit Tujague’s anytime soon, let us know what you think about the changes. Post your thought and photos to the New Orleans Restaurants Facebook page.