Bring up New Orleans drinks and a lot of people think overly sweet, over-the-top Hand Grenades, poured in over-sized bright green plastic cups from the bars along Bourbon Street. Those sort of drinks have a time and place (Bourbon Street), however, New Orleans has a long standing connection with finely crafted drinks like Pimm’s Cup, Ramos Gin Fizz and Sazeracs.

The finely crafted drinks are limited to liquor indulgences; the Crescent City Brewhouse brews their own ales and lagers at their historic 527 Decatur Street location. It’s the only microbrewery in the French Quarter. The others are located outside of the Quarter, you have to head across Canal Street into the CBD to Gordon Biersch, or down Tchoupitoulas Street into Uptown, for NOLA Brewing. You could also go all the way across the Causeway for Abita Brewing on the Northshore.

For fellow beer geeks, Crescent City Brewhouse has an in-house 17 barrel (roughly 34 kegs)  brewing system, and they brew according to the Purity Law of 1516, which means the only ingredients they use are water, malt, hops and yeast. They don’t use any artificial flavors, adjuncts, chemicals or stabilizers.

Their lineup of beers include a Pilsner, which is like Budweiser for all of you macro beer drinkers out there (except this version has more flavor). It’s light, easy drinking and contains hints of apricot like Magic Hat’s #9.

They also have a Weiss Beer, which is an unfiltered wheat beer that has flavors of banana and clover.

Their seasonal beer for August is a Kolsch, a lager that’s cool and refreshing. All three of these make excellent beers for drinking during the hot New Orleans summer weather.

They serve a Vienna style lager that they call Red Stallion. It’s a nice mix of mild hoppiness balanced by a mellow sweetness.

Hands down, my favorite was their Munich Style lager called Black Forest. It had a coffee flavor with a hint of smoke to it. It’s a heavier beer, but I could drink this beer all year long, even with it’s 95 degrees outside.

I recommend starting out with a sampler of their beers, so you can try them all, then decide which is your favorite and go from there.

Of course, they also have food and since this is called New Orleans Restaurants.com, I should probably mention a few things. They describe their cuisine as New Orleans style with traditional Louisiana ingredients, and recipes with modern flair. Their current head chef is a graduate of the Culinary Institute of America. 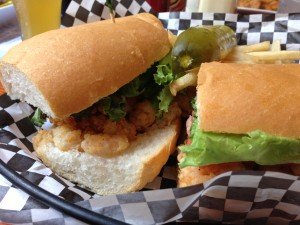 Appetizers, like most of the menu, range from American favorites to New Orleans specialties. They have Hot Wings, Seafood Andouille Gumbo and everything in between.

If you’re in the mood for something more substantial, they have po-boys, including catfish, alligator sausage and cochon de lait, which is slow roasted Cajun spiced pork.

The shrimp po-boy was presented nicely on 50s deli-style checkered paper and with a small slice of pickle. The sandwich came fully dressed, which can sometimes get messy, but the bread they used was soft and held everything together nicely. Coupled with a side of fries and freshly brewed beer, we feel good recommending this as a classic New Orleans po-boy. 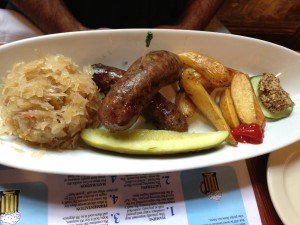 We also sampled Wolf’s German Sausage Platter. Wolf, the brewmaster, is German, and in his honor they have a sausage platter that might be one of the that I’ve had on this side of the Rhine.

If you’re a little hungrier, they have entrees that include local favorites like crawfish etouffee, shrimp and grits and pasta jambalaya.

Save room for dessert. The apple cobbler mixed with vanilla ice cream was definitely worth the calories.

If you’re looking for a taste of New Orleans paired with craft beer, I’d add a visit to the Crescent City Brewery to your itinerary.

This month, we’ve joined with Crescent City Brewhouse to giveaway a $100 gift certificate so that you can taste test their beer and food options for yourself. Enter to win here!