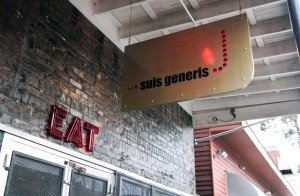 Off the beaten path, there’s a little restaurant making a big splash in the Bywater. It’s Suis Generis, and after hearing much talk about it, we decided to finally give it a try ourselves.

One of the best things to know about this restaurant is that it was born purely out of the love of food. One of the co-owners, Ernest Foundas, is a practicing attorney who happens to love food so much that he started this place on the side. He runs the kitchen, so the food you order is mostly the product of culinary imagination. The other co-owner, Adrienne Bell, is an industrial designer, so it should come as no surprise that she designed and built the bar and booths herself. If that’s not love, then we don’t know what is.

One thing we can say after dining here is this: The owners' passion for great cuisine and design is easily represented by the food they serve and the fun, quirky atmosphere it’s served in. This place has personality. 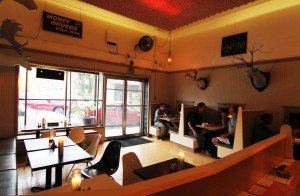 When we arrived, we noticed the sign above their big windows covered in iron work. Just walking by, the restaurant is completely unassuming, but the chalk work and warm lighting give it an inviting appeal. When we stepped inside, we were greeted by up-beat piano music, candle-lit tables and a back-lit bar. The atmosphere is warm and intimate, but also casual and comfortable.  The main dining area featured square white tables and a couple of booths (complete with small fake fireplaces).

The decor also sets a playful tone. Look for the Barbie dolls hanging around. A trip to the bathroom is a like stepping into some kind of trippy Mad Magazine archive. Even the salt and pepper shakers will make you smile (ours were made into toy trucks, which brought out our inner-kids as we rolled them around the table).

The art-work changes once a month, featuring local artists, and it’s for sale. It’s also inspiration for some of their food dishes. For example, giant white deer heads loomed over the dining room as we ate, and one of the dishes on the menu was “watching you venison.”  Hey, you have to love their sense of humor!

Speaking of the menu 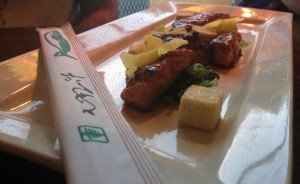 It changes often. Weekly, even. That’s one reason why chefs love working in the Suis Generis kitchen, Foundas said. It never gets boring. The changing artwork and menu means that you can come to this one restaurant multiple times and never have the same experience twice. It’s a great concept.

We started the meal with a pickled vegetable appetizer. Among the carrots, red onion and pickles, there was picked Brussels sprouts, which we thought was a unique touch. If you haven’t had Brussels sprouts before, then we don’t recommend you start with these, but if you’re already a lover of the vegetable, then dig in. We haven’t come across many places that serve them this way, and we like it.

We also ordered the salmon char siu, one of the many small plates they offered. The salmon was cooked perfectly – not raw or overdone, just right at that sweet spot that is sometimes hard to achieve when cooking fish. The brown sugar marinade was a good call by the chef, and the crispy tofu and seaweed salad were great compliments to the dish. The fresno and chili sesame dressing drizzled on the plate made the dish, though. It was the perfect accent of flavor that the salmon needed.

We liked the salmon cahr siu so much that we placed another order for it. 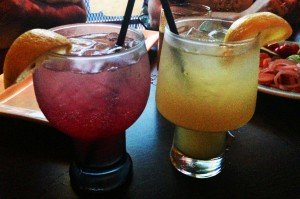 When we sat down, we were presented with a nice beer and wine list, with a few specialty cocktails listed as well. If you’re into mixed drinks, the lemonade was good, and we were able to pick what kind of liquor we wanted mixed in – tequila, rum, whiskey, etc. We picked rum and were happy with our choice. It was the perfect end-of-summer drink. One of the people in our party wasn’t sure what he would like, so the waitress asked him a couple of questions about his taste preferences, left, and then came back with a beer for him to try. He was happy.

Next up: Main courses 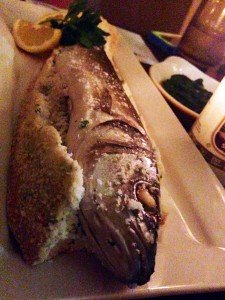 First rule of thumb: If the owner of the restaurant recommends you order something on the menu, then listen. Order it. That’s what we did after Foundas told us how good the salt crusted whole bronzino fish is.

When placing the order for the fish, the waitress warned the table that it takes 35 to 40 minutes to cook, which was a nice heads-up. We didn’t mind, so we gave the green light. The fish was stuffed with orange slivers and a blend of fresh spices. Then, the chef encased it in a citrus, thyme, and rosemary salt crust before baking.

It was worth the wait.

Beautifully presented by the waitress, the fish was served whole with a side of sautéed spinach and arugula. We’re not exaggerating when we say that this was some of the best fish we have ever had. Flaky and full of flavor, we kind of wish we would have ordered two more. As with any whole fish, you have to watch out for the bones, but if this dish is being served when you dine there, please take our word – order it.

We also tasted the lasagna, which isn’t anything like the kind your Italian grandmother might make. The noodles were made in-house, stuffed with sweet potato, goat cheese and onion, and then topped with sautéed crabmeat, crab fingers, artichokes, leeks and a brown butter sage sauce. Overall, the dish was very flavorful, and a good portion size (even though we ended up taking some home - also a good sign).

The last dish we’d like to give a shout-out to is the Tunisian chicken thighs. One person in our group ordered this dish and let the rest of the table try it. We all agreed later that we wish we could have more. Served with a cucumber raita yogurt dip, chickpeas, chili sauce small slices of pita bread and feta, the dish was pleasantly Greek in nature. The chicken thighs were cut into cubes, which made for easy pairing with the bread, or perfect for dipping.

There was an “endings” menu, which featured cheesecake with berries, avocado crème brulee, fig ice cream and homemade pop-tarts (your choice of flavor!), but we unfortunately didn’t have time to try any.

It makes a great excuse to come back though – and we certainly will come back.

BONUS: To see more photos of Suis Generis, visit the New Orleans Restaurant Facebook page, where we'll be posting a Suis Generis gallery - including a pic of that awesome bathroom we mentioned.