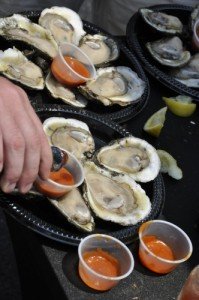 You know you're in New Orleans when the people around  you celebrate the months that include the letter "R". Yep, it's oyster season, and we couldn't be happier about it.

There are so many great ways to enjoy these little sea creatures. It hurts us though when we hear people say that they are too scared to try them. Didn't your momma ever tell you not to knock it before you try it?

If you're new to eating oysters, here are five different ways you can try them. Some you may love, and some you may not care for at all. Regardless, trying giving each one a shot. You may surprise yourself.

Before you turn up your nose, hear me out. Raw oysters are like New Orleans's answer to sushi.

Even though there's technically not a right or wrong way to eat anything... Here's the right way to eat raw oysters: You don't eat the raw oysters by themselves! Almost every place that serves raw oysters will bring them out with three other items: Saltine crackers, cocktail sauce, and horse radish.  Take an oyster, put it on a cracker, add the cocktail sauce and a dab of horse radish on top, and eat it in one big, delicious bite.

Is there anything that's fried that  ISN'T good? Oysters are no exception. You can order them by themselves, by my favorite way to eat them is in a fried oyster po-boy, fully dressed.

Bottoms up! It's food and drink in one quick shot. Oyster shooters vary from restaurant to restaurant, but you can generally expect a mix of hot sauce, a little lemon and an oyster served in a shot glass of tequila or vodka. They're good, but be careful - they are dangerously addictive. If you plan on having more than one, then make sure you have a designated driver.

Oysters Rockefeller may have originated at Antoine's, but now you can find them all over the city - and country for that matter. Oysters are served up on a half shell accompanied by ingredients like bread crumbs, Parmesan cheese, Spinach and more. It differs a little from restaurant to restaurant, and the original Antoine's recipe is a well-guarded secret. However, it's said that this dish got its name because the sauce was a rich as the Rockefellers!

From the grill to the plate, this is a New Orleans favorite! Oysters are grilled with cheese, butter, garlic and whatever else the restaurant prefers. One of the best parts is dipping French bread into the leftover sauce it creates.

However you like  your oysters, you'll be in good company in New Orleans. Give them a shot, and let us know what your favorite is on our Facebook page. We'd love to see pictures of you trying your first oysters!

The world is changing and so is the way New Orleans eats. At the current time, Louisiana has required restaurants to discontinue …