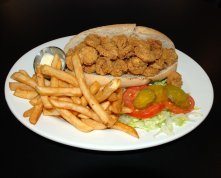 Ask any New Orleanian where our famous po-boy sandwich came from, and you’ll get a different answer every time. But the true origin of this irresistible city  staple comes from brothers Bennie and Clovis Martin, two former streetcar conductors who opened a coffee stand in the French Market in 1922. Seven years later, disagreements between carmen and New Orleans Public Service, Inc. (now Entergy) came to a head and over a thousand streetcar workers struck, knowing that their jobs and livelihoods were at risk.

Among the carmen’s many supporters were the Martin brothers, who pledged to feed the “poor boys” of Division 194 for free as long as the strike went on. Sandwiches were the most economical way to do this, but the pointed ends of New Orleans French bread meant that a lot of bread was wasted. So the Martins worked with baker John Gendusa to develop the first po-boy loaf, called “the special” or “the long john.” It was 40 inches long and rectangular to its ends, and a 15-inch “standard” lettuce and tomato po-boy on Gendusa’s bread was free. One Mardi Gras Day, the Martins and their thirty-nine employees used over 3,000 loaves!

Nowadays, Leidenheimer’s is the standard bread for po-boys, and we fill them with much more than lettuce and tomato: think roast beef debris, fried shrimp, oysters and catfish, and even more exotic and imaginative ingredients like chicken livers, Thai pork, cochon de lait, and more--all celebrated every November at the Oak Street Po-boy Festival.