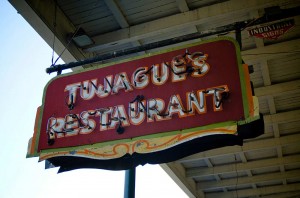 Tujague’s, a 160-year-old French Quarter treasure, has named Guy Sockrider as the new executive chef.  Tujague’ s tells us  Sockrider has over 30 years’ experience in the culinary industry and has earned multiple awards and accolades.

“Tujague’s has had an incredible and memorable past. As we wrap up our 160th anniversary, I’m excited for the future of the restaurant and know that Chef Guy is the perfect candidate to lead our team and take us into the next era,” says owner Mark Latter.

Patrons of the famous restaurant have nothing but delicious dishes to look forward to, as Sockrider will continue to execute the signature dishes and maintain the standard of excellence the second oldest restaurant in the city is known for. The culinary master will also feature an array of new dishes that showcase his inventive technique and culinary philosophy Latter says.

A graduate of the Culinary Institute of America in Hyde Park with an additional diploma in Haute Cuisine from Dumas Pierre in Chicago, Sockrider has helmed the kitchens of restaurants and hotels including Gault Millau winner Top O’ The Cove and Ralph Brennans Jazz Kitchen in California; Muriel’s Jackson Square, The Royal Sonesta and The Bourbon Orleans Hotel; and most recently Tomas Bistro in New Orleans. He has received multiple awards and has appeared on national television shows Great Chef Series; Travel Café and Extra!

Tujague’s is located at 823 Decatur Street in New Orleans’ French Quarter. For information on the restaurant and other 160th Anniversary festivities, visit www.tujagues.com.