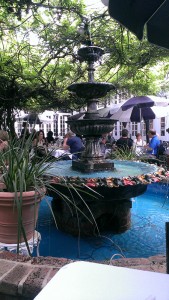 The Court of Two Sister is one of those restaurants that visitors go to year after year, making sure to stop by whenever they’re in town. However, it had been a long time since my last appearance, so on a warm, sunny Sunday morning I headed into the Quarter for their jazz brunch.

Walking in the restaurant, it’s hard not to wonder about how many people have walked through the hallway and into the open air courtyard dining room. The architecture brings visitors back to another time. With tiles that are worn from hundreds of thousands of diners and busy staff, it’s not hard to picture what this restaurant looked like fifty (or maybe even a hundred) years ago. 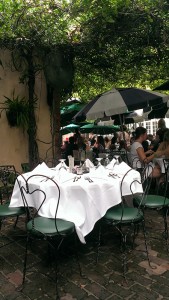 Let’s be honest, some of the restaurants in this area that are this old are just living on their reputation. I had heard mixed reviews about Court of Two Sisters recently, and I couldn’t believe it was true. That's one reason I went to check it out.

At other restaurants, some waiters make you feel like just another customer, or even worse, raise their noses to you in a snob-like fashion. However, our waiter was genuine, and when he found out we were locals, he skipped ahead to the short version of his restaurant introduction so that we could take care of more important things, like drink orders and heading to the buffet.

Keep an eye out as you walk around the buffet. It can get get crowded there and watch out for the other staff because they’re in a big hurry. As I made my way through the crowd around the buffet tables, I wasn’t just bumped once by staff, I was bumped multiple times. Of course, I'm more than willing to give them the benefit of the doubt, around noon on a Sunday morning and the they had a lot of hungry customers to keep up with. 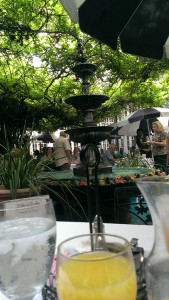 However, one bite and I quickly forgot about everything else. I know a lot of people skip the salads and cold appetizers, heading straight towards the hot buffet, but they’re missing out. There were a number of can’t miss items, including a crawfish pasta with amazing flavor.

From the hot side of the room, the line for eggs benedict can be long, but it was worth the wait. This Sunday, they had a large number of meat selections, all tender and delicious. In a city filled with great Creole cooking, the grits were okay, the jambalaya  was so/so, but hands down my favorite turtle soup in New Orleans may be at the Court of Two Sisters. I’m craving it now, just writing about it.

For dessert, the bananas foster scored high rankings with my taste buds, but the bread pudding was the star of the show.

If you want to hear the jazz band, ask your host to seat you near where they're playing. My only minor disappointment was the jazz band stayed inside the whole hour plus that we were there. We could hear them in the distance, but they never made it to our corner of the courtyard. However, I’ll take a beautiful day in the courtyard any day to make up for that.

Is Court of Two Sisters living on their reputation? No, I think it’s still a place I would recommend to friends and family coming into town.  It’s a great place to stop for brunch before heading out to explore New Orleans.