Matthew Osset: The man behind the wine at Antoine's Restaurant 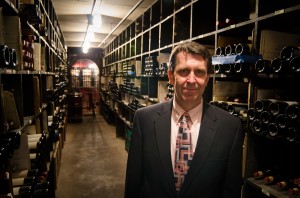 The wine cellar at Antoine’s is impressive. The long, narrow, dimly lit hall houses 16,000 wine bottles stacked from floor to ceiling. Many of bottles have a thin layer of dust collecting on their exposed bottoms. On one end, black iron bars protected by Plexiglas let restaurant customers peek in during their waiter-lead tour.

In the middle of it all, at a small desk with scattered paper, sits one man in a nice black suit. He’s the keeper of the wine, the mastermind of the list. He’s Matthew Osset, and he's a gem in Antoine's rich history.

Currently the wine buyer and beverage manager, Osset has been a fixture of Antoine’s since he began working at the restaurant as a busboy on April 11, 1981.  A sophomore at the University of New Orleans, he was looking for some night work. His grandfather, Tommy Williams (who everyone called Chico), was a waiter at Antoine’s, and he helped Osset land the job.

But after a few more semesters at UNO, Osset decided he wanted to turn his part-time job into something more. That’s where his story at Antoine’s really begins.

Osset quickly rose in ranks to waiter – a major feat at Antoine’s. At that time, candidates had to complete a five to ten year apprenticeship before earning waiter status. Osset did it in four and a half, and began what would become a 25 year stint as an Antoine’s waiter.

“I was very happy being a waiter here and thought that would be the rest of my time here, but then Katrina came,” Osset said. “John, the previous buyer/beverage manager, stayed in North Carolina and never returned.”

With sales down and employees scattered after the storm, Antoine’s had to re-ensemble a team to keep the restaurant going.

“They know I liked to drink wine,” said Osset with a laugh.  “Michael Gus always caught me with that glass of wine in my hand. He actually said, ‘All the wine you’ve been drinking around here, you have to know something about it now!’”

So that’s where his wine career began. According to Osset, the learning curb was a little steeper than he originally anticipated.

“When I came back here (in the cellar) I realized that I didn’t know as much as I should about wine, so they started sending me to school,” he said.

Since then, he has become a Certified Specialist of Wine with the Society of Wine Educators, a French Wine Scholar with the French Wine Socity, and has been certified by the Wine & Spirit Education Trust.

In other words – this guy really knows his wine.

Now, every Tuesday from about 10 a.m. to 2 p.m. wine representatives line up bottles for him to taste, and hopefully order.  He helps customers pick which wines to pair with their meals. He even stands in as a bar tender at Hermes Bar when one of his 14 staff members doesn't show up for work.

Osset does miss being a waiter sometimes.

It seems like his customers miss him too. “They still call me to make reservations.”

That being said, it’s hard to imagine anyone else besides Osset sitting at that desk in the wine cellar. Osset has built a collection that he’s proud of – that Antoine’s is proud of.

Someday he’ll pass on the keys to the cellar, but until then, whenever you scan the wine list at Antoine’s, know that each selection represents a carefully thought out purchase by a man who knows wine like a fish knows water. It’s what he loves, and with every happy restaurant patron, it shows.