Behind the Signs: Suis Generis 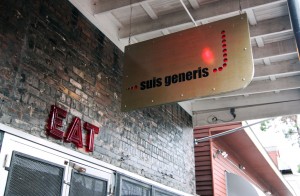 Every restaurant has a name, and every name has a story behind it.  This is the third post in a series called Behind the Signs, where we explore the meaning and history behind the names of restaurants across New Orleans.

There’s nothing typical about Suis Generis; not its food, not its décor, not its history, and certainly not its name.

Ernest Foundas, a lawyer by day and creative restaurateur by night, is the co-owner of this unique Bywater gem. Although he may practice law full time, food has always been in his blood.  “I got in the restaurant business way before I was a lawyer,” he said.

Both sets of Foundas’s grandparents owned restaurants in Boston, where he would often hang around as a child. After moving a half block from Commander’s Palace in New Orleans, still a kid, Foundas took to hanging out in its kitchen instead. There, he spent time with some of the city's greatest chefs and restaurant icons, like Emeril Lagasse and the Brennan’s family.

Fast forward to adulthood when Foundas moved to Philadelphia and met Adrienne Bell, who was a server at the time. The pair pooled their creative juices together and began looking to buy a place in New Orleans to start their own business.

The restaurant's name, Suis Generis, came later. The restaurant took 10 years to become a reality, and was originally going to be named The Huey, after Huey Long, an infamous former Louisiana governor.  But "suis generis" soon became the frontrunner.

"[Suis Generis] is a legal reference. It means an issue that hasn’t been decided in the legal context, but it's also a nickname Huey Long long had for himself. In Latin, this Huey Long reference means one of a kind, or the original. Our menu is also unique and original, and we make everything from scratch.”

So there you have it.  The name Suis Generis is a Latin phrase meaning “one of a kind,”  like the food they serve, a nickname Huey Long (who was definitely a one-of-a-kind character!) had for himself, and a nod to the owner’s legal background.