An impromptu lunch at Pierre Maspero's 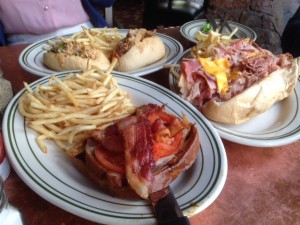 On our way back from a meeting in the French Quarter yesterday, we saw something that no one likes to see – our car getting towed. It was a street cleaning day, and we apparently parked our car in a restricted area. The fact that there was no warning sign to be found is neither here nor there. We decided to do what any other self respecting New Orleanians stranded in the French Quarter and waiting for a ride would do; we decided to eat.

It was only 10:30 a.m., so our choices were significantly less than they would be around the regular lunch hour. Fortunately, The Original Pierre Maspero's was already open, and a very friendly waitress who introduced herself as “Miss Mary” welcomed us with open arms.

After we told her about our car, she suggested Bloody Mary’s and said she would take extra good care of us. She did. Miss Mary is now one of our favorite servers in New Orleans. She even gave us a hug when we left. If you’re looking for some great hospitality, this place has it.

Beyond the service was just some really great food. The restaurant has a brunch menu featuring Belgian Waffles and a variety of omelets, but we skipped straight to lunch. 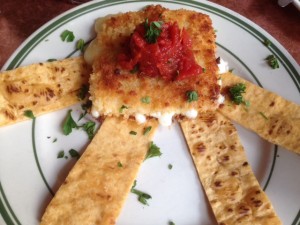 We ordered the Manchego Flats as a starter. None of us had tried this dish before, and we all agreed that we wish we had ordered more. The appetizer, which was the perfect size for the three of us, consisted of a square, lightly breaded block of Manchego cheese with candied tomatoes on top. Thin strips of flat bread were provided for a base. The warm, melted cheese was great, but the candied tomatoes really made the dish; they added the perfect amount of sweetness.

All of the sandwiches were great, but the Creole Turkey Salad was particularly full of flavor. Ingredients? Cajun fried turkey breast, red bell peppers, celery, onion and pecans, all of which were tossed in a creamy Creole dressing and served in bread rolls. The chef definitely knew what he was doing.

The dessert menu looked tempting (especially the Salted Caramel Cheesecake), but we had to start making our way back to the office. When the check came, we saw that they gave us a discount “for being locals.” Miss Mary really took care of us!

We will be coming back to this restaurant soon for a full review. In the meantime, take our advice: The Original Pierre Maspero’s is definitely worth trying out if you haven’t already.