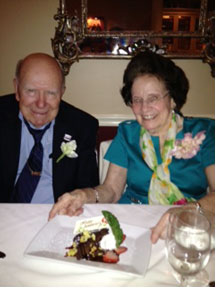 Judy is the CEO of Compucast, the web design and media company that runs NewOrleansRestaurants.com.  She wanted to share the wonderful experience that she and her family enjoyed at Broussard’s.

She said that the wait staff was very attentive, the atmosphere was beautiful and that they had a great spot overlooking a French Quarter courtyard. They even were lucky enough to experience a traditional New Orleans walking parade, called a second-line, pass by as they enjoyed their meal.

However, it was their food that stood out the most that night.

For an appetizer, many in the group enjoyed the Crabmeat Broussard’s, that they described as delectable.  This appetizer is a combination of fresh lump Crabmeat, baked in an artichoke hearts brie béchamel, with Herbsaint Spinach and lemon butter.

After dinner, Judy choose the Banana’s Foster. She said the bananas sauteed in rum, brown sugar, butter and cinnamon, then served over ice cream was one of the best she ever ate.

If you’re looking for someplace special in the French Quarter for your next meal, Judy and the rest of the staff at NewOrleansRestaurants.com suggest checking out Broussard’s.

Broussard’s is located at 819 Rue Conti. Their dress code is business casual, no jackets are required but they do not allow shorts, t-shirts or flip flops. Make your reservation at Broussard’s.

Best Places To Get Crawfish In New Orleans

From Mardi Gras to football, New Orleans is known for its seasons, and we’ve just entered a fan favorite –  crawfish. Served best wit…