What you wanted to know about King Cakes, but were too afraid to ask 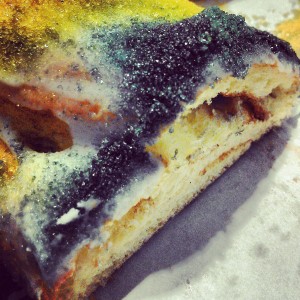 New Orleans is known for its food, like oysters and beignets, but come Mardi Gras season all the attention turns to one edible item: the King Cake.

King Cakes are about as familiar to New Orleanians as apple pie.  These traditional desserts are served at offices, parties, restaurants, the family dinner table.   For many of New Orleans’s teenagers, King Cake parties are the first “boy-girl” parties they attend. If a girl gets the baby in the cake, she then becomes Queen and gets to choose a King for the remainder of the party. Teenage love, y'all.

But what exactly are King Cakes, and how did they come about? For as popular as they are, we still find that many people don't know the history behind them or what they symbolize. Some people have heard of them, but couldn't tell you what they actually are.

Don't worry. Here's everything you need to know about King Cakes, but have been too afraid to ask:

The history behind King Cakes

King Cakes center on the Christian faith, specifically when the three wise men bearing gifts came to Christ Child twelve days after Christmas.  This day, Jan. 6, is known as Twelfth Night, or Epiphany, and it's when King Cake season officially begins every year. The cakes are baked in honor of the three kings – “A King’s Cake”.

King Cakes are oval shaped to symbolize the unity of faiths. They are also decorated in the traditional Mardi Gras colors: Purple to represent justice; green to represent faith; gold to represent power. A small baby - usually plastic, but sometimes gold or porcelain - is baked inside, representing baby Jesus.

So what are King Cakes today?

In the beginning, King Cakes were simply a ring of sweet baked dough with minimal decorations. Today, King Cakes are much more festive, with braided Danish dough covered in purple, green and gold sugar. Over time, New Orleanians began having King Cake parties.  The person who gets the baby in their slice of King Cake  is usually asked to either buy the next King Cake or continue the celebration by hosting the next party that season.

So whether you get a traditional or non-traditional King Cake, pick it up in person or have it shipped to you across the country, we hope you’ll partake in this delicious tradition this season. If you haven't bought one yet, hurry up.  We've already started.