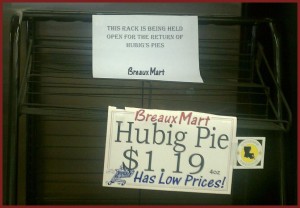 When the HBO television show ‘Treme’ first aired, many New Orleanians breathed a sigh of relief as we bore witness to a cinematic interpretation of our city that did not revolve around Mardi Gras and “gumbo parties”. Yet despite the show’s adherence to the finer points of our culture, the portrayal did not come without some minor scrutiny. In the pilot episode, one of the main characters somehow managed to get their hands on a Hubig’s pie in the immediate aftermath of hurricane Katrina. It was an obvious snafu in eyes of hometown viewers, as most of us knew there was nary a pie to be found in the city until the factory reopened in Jaunary of the following year. The show’s producer, David Simon, felt compelled to address the note by suggesting that the pie in question was a “magic Hubig’s pie.” Nice try David. Anyone from these parts could tell you at least this about Hubig’s pies: they’re ALL magic!

Though a New Orleans tradition for nearly a hundred years, Hubig’s once had roots in a number of cities outside of the Big Easy. The Hubig’s bakery that has lived in the Faubourg Marigny since 1922 was part of a chain of bakeries that opened throughout the southeastern United States. All but the New Orleans location shuttered their doors during the depression (I’m sensing a trend of this city embracing things that no one else wants), and over the next few decades, those little fried pies became a part of our rich and already extensive culinary culture.

It’s been 20 days since a fire destroyed the Hubig’s bakery, and as expected, there has been a public outcry. Remaining stock quickly sold out, and the demand has increased to a fever pitch. In the days after the fire, there were even reports of an individual attempting to sell a Hubig’s pie on ebay for $500 (uhhh?).

As we bide our time under the assurance that Hubig’s will indeed rebuild, certain stores have left shelf & rack space vacant as an acknowledgment of the void the missing pies have left behind. But what if, by some miracle, your neighborhood grocer received an exclusive shipment of 100 pies of your favorite filling, and by some stroke of luck you just so happened to be the 100th person in a line that wrapped around the store…how much would you be willing to pay for the last pie for the foreseeable future?

What would a ‘magic’ pie be worth to you?