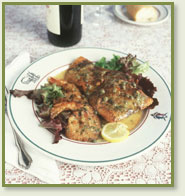 What’s better than a juicy steak, or a fully loaded ice cream cone? Nothing, that’s what.

It’s great that more people are trying to get healthy by exercising and eating right. We’re not advocating being unhealthy. We are, however, saying that sometimes you have to live a little. New Orleans cuisine is some of the best in the world (at least we think so). Visiting The Big Easy isn’t the time to order rice cakes and lettuce.

Here are our suggestions for what to order when scales don't matter and calories don't count:

Forget what you've heard about Shrimp and Grits. As far as appetizers go, there’s nothing quite like the Mississippi Quail With Cheese Grits at The Pelican Club. This unique, tasty dish is a new take on an old classic, and it hits the stomach in just the right spot.

Embers has some great soups and salads, but let’s focus on the Crawfish Fettuccine. Fresh, sautéed crawfish in a creamy alfredo sauce make this dish really stand out. You may have had dishes similar to this in the past, but not with such New Orleans flair. Trust us – it’s worth trying.

The South is all about fried food, and you won’t be disappointed at Marigny Brasserie. In fact, a whole section of their menu is dedicated to fried entrees, like the fried catfish with homemade creole seasoning, and the fried oyster plate with coleslaw.  They also serve traditional side items like garlic mashed potatoes with gravy, smothered collard greens with Andouille sausage and macaroni and cheese.

This is probably one of the most romantic restaurants in all of New Orleans. It’s also among the most delicious. Try the Bleu Cheese Steak – a 6 oz. prime filet of beef stuffed with bleu cheese and topped with melted cheese and sautéed mushrooms. It’s served with new potatoes and asparagus.

If something sweet is what you’re craving, try to apple caramel pie at Tony Moran’s. Made with Shortbread Crust, it’s so good you’ll think your momma made it.

There are plenty of other places worth mentioning. Explore them here.