Where to Get a Great Muffuletta

« Back To: Best Of Guides

Whether you say muffuletta or muffaletta you're in the right city for this New Orleans' specialty. Just about every version of this delicious sandwich has a round sesame seed bun, layers of Italian meat, cheese and olive salad, but no two taste the same. Every restaurant in town adds their own special touch and we've rounded up our favorites.

Curious about the origin of the muffuletta? CLICK HERE to find out where on earth this famous sandwich came from. 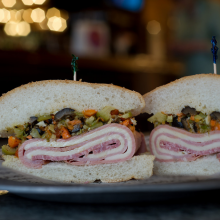 Remoulade
This sandwich has layers of mortadella, salami, ham, mozzarella and provolone topped with an olive salad and placed on a fresh bun. Believe us when we say it tastes as good as it looks.
Learn More 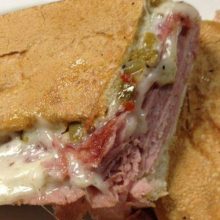 Mulate's Cajun Restaurant
Mulate's version of this New Orleans favorite is made with thin sliced Chisesi ham, Genoa salami, smoked provolone cheese, and house mixed olive salad and seasonings. It is then heated and pressed on French Bread that is sure to excite your palate. You have to taste it to believe it!
Learn More 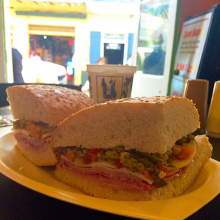 Court Tavern Po Boys
For a fast snack on Bourbon Street nothing beats Court Tavern's muffuletta. For just 10 bucks you'll get layers of meat, cheese and of course, olive salad that will fill you up for an afternoon of fun.
Learn More 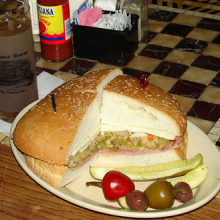 Napoleon House
Napoleon House's specialty is a warm muffuletta. It is served with ham, genoa salami, ooey gooey swiss and provolone cheese and house-made Italian olive salad. We love that you can buy a whole, half or quarter depending on your level of hunger.
Learn More