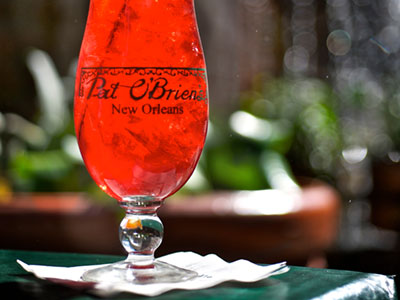 Pat O’Brien ran a speakeasy in the 600 block of St. Peter street in New Orleans’ French Quarter, until the repeal of Prohibition when he officially opened the bar on December 3, 1933.

He developed a friendship with Charlie Cantrell and after many years of fun and lots of poker games, the two men purchased the building that is now home to Pat O’Brien’s Bar at 718 St Peter Street. This historic building was built in 1791 as a private home and later became the first Spanish Theatre in the United States. George Oechsner and his son Sonny purchased Pat O’Brien’s Bar in 1978. It was their forward thinking that broadened the scope of the Pat O’s experience. These days, the 3rd generation of the Oechsner family prevails along with many long-time, dedicated, and invaluable people.

In the 1940s, many US distilleries were used to manufacture necessities for wartime, and domestic liquor was scarce. However, rum coming up the Mississippi river from the Caribbean islands was plentiful. In order to buy a case of bourbon, for example, there was strong incentive to purchase large quantities of rum. With General manager George Oechsner, Jr. at the helm, the folks in the bar experimented with recipes, and eventually everyone agreed that passion fruit was a hit! A glass shaped like a hurricane lamp was the perfect vessel and the Hurricane drink became New Orleans’ favorite libation.

Réveillon is a New Orleans tradition dating back to the mid-1800s. Back then, Creole families celebrated Réveillon twice during the holi…