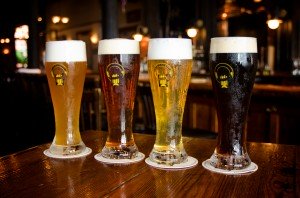 American Craft Beer Week, the celebration of small and independent breweries and the beers they create, is in full swing in New Orleans.

It wasn’t too long go that this town, known at least in part for alcohol consumption (for better or worse), was a craft beer desert. Luckily, in the past few years the desert has become an oasis; now there’s much more to enjoy in New Orleans than just sugar filled drinks served to tourists in flashy green cups.

Just about every bar has at least one or two craft beers on tap. Local breweries are capturing national attention with more and more independent breweries popping up all of the time. Not to mention the national breweries that are entering the market for the first time, drastically increasing the options of good beer to be found. There’s never been a better time to be a beer lover in New Orleans.

This week (May 12-18) bars across town are offering beer specials, and dining establishments are pairing beer with dishes on their menus. If you’re a craft beer aficionado and can’t make it down to NOLA for Craft Beer Week, don’t worry; there is plenty of craft beer to enjoy any time of year here.

Near many of the hotels in the French Quarter and the Central Business District (CBD), there are two brewpubs worth checking out. They both come with a heavy German influence, so if you’re looking for dry hopped IPA you might have to head up Tchopitioulas Street. However, if you’re looking for high quality beers matched with delicious food, you’re in the right place:

Crescent City Brewhouse is the only microbrewery in the French Quarter (Jax Brewery still has the sign on the building, but it’s been a long time since they brewed beer there. Now it's a shopping center).  On the menu you can find a mix of Creole-Cajun cuisine with a few German favorites, and listen to jazz performed nightly.

Crescent City Brewhouse brews five beers on tap. Their beers include the Black Forest, a traditional Munich style beer (dark, full bodied and malty); a Weiss Beer, which is an unfiltered wheat beer with hints of banana; the Red Stallion, a Vienna style brew with a mix of malt and hops; and a Pilsner, a light, perfect-for-summer and easy-to-drink lager. They also make a special brew that rotates on a monthly basis.

All of their beers are brewed following the Bavarian Purity Law of 1516 with just water, malt, hops and yeast.

Head across Canal Street and you’ll find Gordon Biersch tucked into the side of Harrah’s Casino. The national chain brings their gourmet bar food and world class beers to New Orleans for both locals and visitors. As far as the food menu, make sure to start off dinner with their “legendary” garlic fries and choose the mouthwatering steak for the main course.

Gordon Biersch also offers five beers on tap: A light, refreshing lager called Golden Exporta; Hefeweizen, which is another wheat beer; Schwarzbier, a dark larger with hints of roasted coffee; another classic beer style called the Marzen, a Bavarian larger with a sweet Munich malt finish; and for the domestic drinkers or those looking for a light beer during the hotter months, they have a Czech Pilsner, a Pilsner with a medium body and bold, bitter and spicy taste.