Every restaurant has a name, and every name has a story behind it.  This is the first post in a series we’re calling Behind the Signs, where we explore the meaning and history behind the names of restaurants across New Orleans. 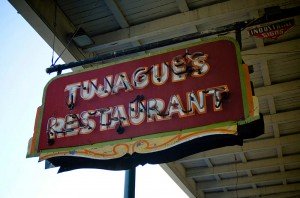 Even before New Orleans was called “New Orleans,” the building that houses Tujague’s Restaurant was standing.  Only then it wasn't a restaurant; it was a Spanish armory. Through war, depression, fire and plague, the historic building has stood for more than a century.

So how did it become Tujaque's?

The original owners of Tujaque's Restaurant were named Guillaume and Marie Abadie Tujague, and they immigrated from Brodeaux, France to New Orleans in 1852. Four years later, they opened the doors to their very own restaurant, serving breakfast and lunch to the working class who crowded the Crescent City’s riverfront.

Only there was competition. According to Poppy Tooker, an expert on the restaurant's history, Tujague’s had never been quite as famous or as important as the restaurant that was three doors down – Begue’s.

“By the time of the golden age of travel in America, when tourists were coming to the city in droves, the city put on a cotton exposition where Audubon Park now is,” she said. “(The tourists) came right off the train and went to what Madam Begue called The Butcher’s Breakfast – what we know now as brunch. She only served it once a day, at 11 a.m., to 30 people. Needless to say, it was very difficult to get in Begue’s.”

But Madame Begue died in 1906, and Guillaume sold Tujague’s to its second owner, Philibert Guichet, in 1912 shortly before his death. With new ownership and help from one of the Begue’s employees, Guichet purchased Begue’s, moved in the building, renamed it Tujague’s, and the rest is history.

Since then, depending on how you count it, only one other family has owned Tujague’s. But the name has stayed the same.  As the second oldest restaurant in New Orleans (and one of the oldest bars in America), Tujague's is one of the most recognized names in the city.

The history is not lost on the locals.

“It’s tradition in many, many New Orleans families to celebrate holidays like Thanksgiving and Christmas over a meal to Tujague’s Restaurant,” Tooker said.  “Some of the dishes that used to be a part of the classic, old line creole cookery, like the boiled beats – the only place that it still exists these days is on the menu at Tujague’s.”

As an added bonus, here's this tidbit: Poppy Tooker, along with Pelican Publishing Company, is producing the first-ever Tujague's Cookbook. Keep an eye out!