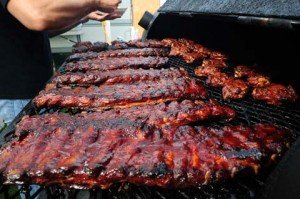 New Orleans isn't particularly well known for its BBQ. Traditionally, the distinction of 'World's Best' has been hotly debated among cities like Memphis, St. Louis, Kansas City, and even a handful of obscure towns in Texas. Considering the vast array of other dishes that the Big Easy is famous for, one might be led to believe that BBQ is a forgotten art in our part of the U.S., or simply not in our cultural wheelhouse. But ask any self-respecting New Orleanian and he or she will tell you that though our Cajun and Creole dishes may grab headlines, this is a FOOD town, through and through. Whatever your tastes, you'll find top flight culinary delights in all parts of the city...and it just so happens that in the next couple of weeks we'll be celebrating all things BBQ...with a touch of the blues!

The 7th Annual Crescent City Blues and BBQ Festival will be setting up shop in Lafayette Square October 12 - 14. Produced by the New Orleans Jazz and Heritage Foundation, this free event aims to feed body and soul. The Festival will include performances by Clarence  Carter, three time Grammy Award winner Keb Mo, the Bo-Keys featuring Otis Clay, Blues Song of the Year Award winner Johnny Sansone, Grammy Award winning blues guitarist Chris Thomas King and many more. BBQ vendors will include Fat Hen Grill & Grocery, The Joint, Walker’s Love at First Bite, and Smokin’ Buddha BBQieux. In addition to food and music, the festival will host a regional art market, as well as an autograph tent for meeting the performers.

So strap on your bib, and make plans to attend this one of a kind New Orleans festival. Let's show 'em we do BBQ in the Big Easy!