Spicy, filling jambalaya is everyone’s favorite dinnertime mainstay here in New Orleans. You’ll find it at every group gathering, from church dinners to family reunions. So where does the dish come from? 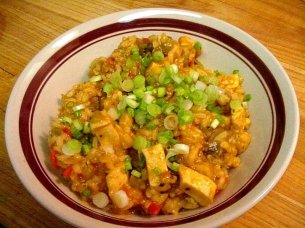 Regardless of its origin, jambalaya has been popular in Louisiana since (legend has it) the Spanish tried making paella in the French Quarter in the early 19th century, quickly discovering that they had no saffron. They substituted tomatoes for flavor. As Caribbean immigrants poured into the city, a unique blend of spices turned this dish into what’s known as Creole jambalaya.

Not to be confused with Creole jambalaya is its friendly relative, Cajun jambalaya. The Cajun version omits tomatoes, opting to brown the meat instead. What kind of meat? You name it: crawfish, oysters, shrimp, duck, alligator, turtle, and even boar and nutria can be found in Cajun jambalaya. In both versions of the dish, the meat is cooked with “trinity”--a combination of diced bell pepper, celery, and onions--and vegetables. Long-grain rice is added to soak up the rich flavors. When the rice is done, your jambalaya is ready! Part of what makes jambalaya a New Orleans wonder food is that you can make as much or as little of it as you need.