Everything you didn't need to know about the snoball 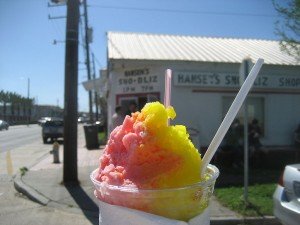 New Orleans subtropical climate becomes particularly evident during the humid summer months, so it’s no surprise that locals and visitors alike are perpetually searching for ways to stay cool. Whether you’re strolling down Magazine Street or taking a swamp tour, you’re bound to find a family owned and operated snoball stand near you.

Snoballs have been around in New Orleans since forever, but the snoball as we know it came about in the 1930s thanks to the invention of electric ice shaving machines. Unbeknownst to each other, George Ortolano and Ernest Hansen each built their version of New Orleans’ first electric ice shaving machines around the same time. Prior to this, New Orleanians were used to hand chipped ice. The electric machines resulted in finer ice than could be achieved via hand scraping chunks of ice off a solid block. Ortolano’s machine is widely sold throughout the Gulf Coast region as the Snowizard brand snowball machines, whereas Hansen’s machines are used exclusively at the family’s Sno-Bliz stand on Tchoupitoulas Street.

Not to be confused with the coarser, denser snowcone, the New Orleans style snoball ice is shaved to order which makes for the finest, lightest ice you’ll find, which is then drenched in the flavored syrup of your choice. You can opt to have yours topped with condensed milk, or even stuffed with ice cream. The result is a fluffy sweet concoction that’s best enjoyed with a spoon and a straw on the hottest of days. Traditional syrup flavors include nectar cream, wedding cake, tiger blood, tutti frutti and spearmint, but the list of flavors is seemingly endless. Syrup recipes are closely guarded; many snowball stands have passed theirs down from generation to generation, and a few have been in operation for 80 plus years.

Most snoball stands operate seasonally, from March to October, so indulge in this local’s favorite as often as you can.